County Galway is famous for its pubs which are often the centre of culture especially Traditional Music. It is not unusual for a spontaneous session (Seisiún) to break out in any pub in County Galway at any time of the day or night.
County Galway abounds with traditional musicians and there but internationally Galway is best known for its annual Galway Arts Festival. 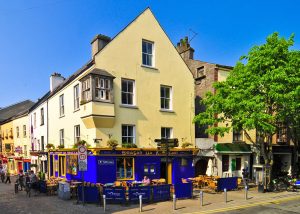 Naughtons is one of the best known pubs in Galway city. With its interior unchanged since 1894 this pub is full of tradition and is regularly the scene of inmpromptu traditional music sessions. Also serves very good food in its Artisan Restaurant.
Unmissable with its strong blue exterior, Tigh Neachtain shows its nameplate in old Irish lettering, reading Seaghán Ua Neachtain. 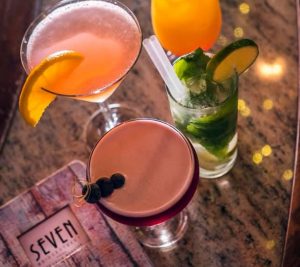 Seven is a 700 capacity Pub, Restaurant, Club and Live Venue (The Loft) on Bridge Street in The Latin Quarter, of Galway.
Food is served daily from 10am until 9pm Sunday to Thursday and 10am until 8pm Friday & Saturday.
There are Late Bars every Friday, Saturday & Bank Holiday Sunday and ther is free live entertainment 7 nights a week. Also bands and DJs.
The Loft is the 300 capacity purpose built live venue upstairs a 10k Turbosound sound system, Chauvet lighting and state of the art projection system for movie screenings.
“The perfect location for incredible cocktails, tempting food and quality entertainment, 7 nights a week.” 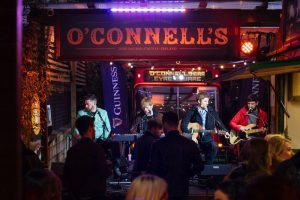 O’Connell’s Bar in the centre of Galway City was founded in 1862 and it still retains much of its original style and decor. But it is a really modern pub in that it serves a huge variety of drinks and great food including pizzas from Dough Bros.
There is regular live entertainment with some top bands and sport on the big screen is a big feature there. (Like Kodaline and Ed Sheeran).
It has LateNight bars and a Beer Garden.
O’Connell’s serves a wide selection of craft beers, wines and spirits from all around the world including a huge collection of over 110 gins and 120 whiskies. 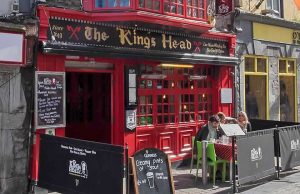 The Kings Head, is one of the oldest pubs in Galway. The fireplace dates from 1612. Popular with students, there is music nightly as well as theatre and comedy with resident comedian Tommy Tiernan appearing from time to time.
Probably named after Charles I of England who was executed (beheaded) in 1649 the building is said to be over 800 years old. The pub is steeped in the history of Galway City and its tribes.
This pub is noted for its great pints, wholesome food, great musicand comedy. 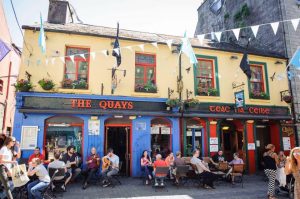 This is one of Galway’s most popular Pubs and is often filled with American and European tourists, especially during the summer.
The interior is an interesting mix of eclectic styles ranging from medieval French church to old style traditional pub.
There is some live music in the pub most nights and upstairs ithere is a live music venue there is music seven nights a week until 2 am – often Rock n’ Roll but sometimes find Country & Western Irish style or Irish Trad music.
Good food also served and you can eat or drink outside at tables on the street which is most enjoyable in good weather.

Róisín Dubh, is one of the most popular venues in Galway and features some of the top bands and comedy acts in the country. It has a large smoking area and is open seven days a week until 2 am and is always busy.
This is probably the busiest venue in Galway with a constant stream of new and established talent in music and comedy.
Many big names have performed here including Stewart Lee, Phill Jupitus & Rich Hall. The list of names is long but include top acts like Franz Ferdinand, Ed Sheeran, Ray Davies, The Coronas, Pete Doherty, DJ Yoda, New York Dolls, Booker T, Maverick Sabre, Billy Bragg, The Lemonheads, Imelda May and lots more.
Late night discoand Open Mic are also features.